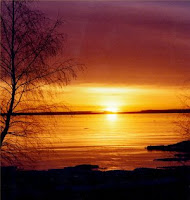 Rai stretched and turned just like a baby in her sleep, as Krishnendu removed the curtains of the sea-facing window of their hotel room slightly, to let the fresh air come in and gently kiss his beloved. He turned back to see if Rai was awake but could not turn his eyes from her; her face was glowing golden like “a thousand splendid suns”, as if a complete ocean of glitters had been sprinkled on her. “Rai, you are so beautiful!”  Krishnendu told himself staring at her in awe as if he were discovering his beloved all over again. Even though winter had almost vanished from the coastal belt of India, the early morning gentle breeze of the end winter left a soothing chill inside the room. Rai was sleeping peacefully, completely unawares, unperturbed, as if she had found heaven and had nothing to lose today.

Krishnendu bent slightly towards the side table placed beside the bed to get hold of the cleansing milk and a ball of cotton to remove the kohl from her eyes. He remembered one day Rai had slept without removing it as she was dead tired only to discover the next morning that she had got a bad eye infection. She had made his life sweetly hell then, made him sit beside her and do hot and cold water compressions on her eyes the entire day with intermittent shrieks. No matter how much he disliked certain childlike and immature habits of Rai, yet he loved them because these are the certain messy yet beautiful little gestures that keep the child in her intact even at the age of 30.  As he was gently rubbing the kohl under her eyes, he was thinking how he felt that Rai always smiled with her eyes. He would often tell her, “Rai, your smile always touches your eyes and when both meet, you look the most beautiful”. Rai would just listen to him silently and suddenly burst into laughter and say, “Krishu, you know why you feel like that? Because I smile from the very core of my heart and that is why my smile is so pure."

Krishnendu knew how much true Rai was, yet he would always add a pinch of salt in this by saying, “Oh Rai, both you and your heart are out of control”. That reminded him of an incident which had placed him in a very awkward position, yet he could not help but laugh along with a meeting room full of colleagues. Two years back Krishnendu was away for one month to New York on a business tour during the month of December. Both of them were working in the same organization then. As Rai was winding up for the day at around 7:30 in the evening she saw Krishnendu online and without even thinking for once, pinged him saying “Hiiii Krishuuuuuuuuuuuuuu! I miss you endless love, let’s go and hide under the snow in the roads of New York, so that no one can find us.” Krishnendu was very embarrassed as a chat window popped up suddenly on the projector screen in front of 15 people.  Just as he was feeling like yelling at her and looked up to say ‘sorry’, everyone burst out in a roll of laughter inside the meeting room. “This is indeed a wonderful idea Mr. Chatterjee, though a little wild,” one of them said. After the meeting was over and everyone had left, Krishnendu sat down with his laptop, yet to digest Rai’s weird act, he decided to look at the messages Rai had pinged him and he could not just help but smile at her sheer innocence.

Krishnendu was laughing on his own thinking about all these weird deeds of Rai. It was half past two at night, and he could only hear the sound of Rai’s breath. It was midnight blue outside, Rai’s favourite colour as she always felt this was the colour and moment of the most intense love. He was still sitting on the bed just beside Rai, looking through the glass panes straight at the sea. A few occasional waves were coming and going and the moon was partly hidden behind the layer of a thin cloud. It was indeed romantic and he wanted to pour all his love on Rai; he just wanted to stare at her the entire night without even blinking for once. All of a sudden it reminded him of her fever, and he heaved a sigh of relief when he placed his palms on Rai’s forehead; the fever was almost gone. He wondered how much trust Rai had on his touch as she kept on saying, “Krishu no matter how seriously ill I am, nothing will happen to me if you are there beside me."

As dawn was approaching, Krishnendu felt somewhat sleepy and hence decided to put on the portable CD player that he brought with him. How about Raga Ahir Bhairav on Sitar? - he thought to himself and decided to play the Vilayat Khan CD that he brought. Vilayat took him to a different world altogether. He had developed his taste towards Classical Music from Rai. She was the real admirer and had been a diligent disciple for more than 15 years. It was the most beautiful dawn in his life undoubtedly with his beloved sleeping like a damsel bathed in an ocean of solace, the sunlight kissing the beach and Ahir Bhairav crooning at the background. He selfishly thanked his stars for Rai’s sudden illness.

As Krishnendu was recollecting all these things looking at the sea completely lost, he heard a very soft “Krishu, goooood morning” jingling in his ears.  Krishnendu hurriedly looked at Rai and saw her spreading her arms towards him just like a mother waiting eagerly for her child to submit himself completely. “You didn’t sleep Krishu?” The child in Rai asked. Krishnendu was speechless looking at his sleeping beauty and could say nothing and simply nodded his head slowly to negate her. How could he sleep? Would he not have lost a divine opportunity otherwise? Krishnendu rediscovered his life, his love and fell in love with his Rai all over again. He was immersed in the very deep of her eyes, gently held her hands and whispered “Rai, lets fly high to eternity, not to be found again by anyone.” Rai was lost in his eyes and a few drops of tear drops rolled down her cheeks as Krishnendu hugged her tightly and kissed her with all his love.

Rai was feeling an uncanny chill in her body and woke up suddenly only to realize that she had a lovely dream, a dream which would remain with her for the rest of her life never to be fulfilled.