Stuck in the Waiting Room 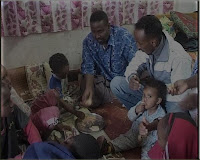 Mahad Abdullahi Hassan had never heard of Nepal before the day he landed there. When the 28-year-old Somali boarded a flight from Dubai to Kathmandu on May 23, 2007, he was hoping he would finally reach his dream destination: Sweden. He had, after all, shelled out $4,000 to a human trafficker who promised to smuggle him to the Scandinavian country.


Instead, when Hassan got off the plane, he found himself in the airport in Kathmandu, where a taxi took him and the trafficker, who was traveling with him, to a bustling tourist neighborhood in the Nepalese capital. "It was a strange place," says Hassan. "All the buildings looked the same. Everything was new to me." When they booked a hotel there, the trafficker assured Hassan that he was arranging the necessary documents to complete their journey to Sweden. But the next morning, when Hassan woke up in an empty room, he realized he'd been duped. "I realized I was completely at a loss," Hassan recalls.

At a loss, perhaps, but not alone. Gradually, Hassan integrated himself into the close-knit community of 84 Somali refugees living in Nepal, the largest nationality of some 300 United Nations–recognized urban refugees now living in Kathmandu. The Somalis began to arrive in Nepal in early 2006. Most of them are from Mogadishu, and nearly all of them are victims of trafficking. Many say they, like Hassan, were promised passage to Europe; some claim that they were supposed to go to Naples, Italy, but ended up in Nepal because of the similar-sounding names.

The remote Himalayan nation of Nepal, freshly emerged from its own decade-long Maoist insurgency, may seem an unlikely destination for refugees. But the effects of war in faraway lands have now trickled into this impoverished country. In fact, according to the U.N., developing nations like Nepal now host 80% of the world's 15.2 million refugees, nearly 20% of whom are designated as urban refugees living outside refugee camps. Unlike refugees living in established camps, who are provided with food, homes, medical services, training and education, urban refugees live in cities they have fled to, at once more integrated with their new homelands and more vulnerable to them. Though the U.N. High Commissioner for Refugees (UNHCR) supports urban refugees through assistance and education, some are still vulnerable to detention or deportation. In Nepal, the police have raided the apartments of Pakistani urban refugees on several occasions while searching for illegal immigrants.

Nepal is no stranger to people seeking shelter in its borders. Nearly 87,000 Bhutanese are now living in UNHCR-run refugee camps in southeastern Nepal, having fled the tiny kingdom of Bhutan after government policy stripped them of Bhutanese citizenship. And more than 10,000 Tibetan refugees have been living in Pokhara, a western tourist town, and on the outskirts of Kathamndu since 1959 after the Chinese occupation of Tibet led to the eviction of several Tibetans, including their spiritual leader the Dalai Lama. But apart from these two groups, the government of Nepal — which is not a signatory to the 1951 U.N. convention on refugees that ensures legal protection, other assistance and economic rights of the refugees — does not recognize the other nationalities living in its borders as refugees. According to Basanta Raj Bhattarai, deputy coordinator of the National Unit for Coordination of Refugee Affairs at the Ministry of Home Affairs, the government has requested the UNHCR not to recognize any more cases of urban refugees living in its borders. There are fears, he says, that the country might turn into a safe haven for illegal immigrants. "We don't want Nepal to be a hub for human-trafficking," says Bhattarai. The government recently imposed a ban on issuing on-arrival visas for the residents of a dozen countries, including Somalia, Burma, Iraq, Iran, Afghanistan, Nigeria and Sudan.

Fleeing war, drought and hunger at home, Somali refugees are scattered all over the world. The vast majority have escaped to neighboring African countries. After surviving death threats, kidnappings and the murders of their loved ones back home, the relatively few Somalis in Nepal are just whiling away their time, waiting for what Hassan calls a "durable solution" — repatriation to Somalia, resettlement in another country or local integration in Nepal. As in Hassan's case, they help each other out and also celebrate festivals like Eid together. But they also complain angrily about what they see as the indifference of the Nepalese government and the UNHCR toward their predicament.

For Sayeed Hassan Olow, 41, the patriarch of his family of nine, each day begins with the household chores. Olow wakes up early at 4 a.m., prepares food for his kids and sends them to school. By 8 a.m. he's already at the Lazimpat café meeting his countrymen, and he returns home only in the evening. Without the legal right to work and a monthly allowance of $55 handed out by the UNHCR, keeping food on the table can be a challenge, and the sense of isolation is strong. As Muslims living in a Hindu-majority nation, they have to travel several miles to reach the nearest mosque for prayers. Kathmandu's syncretic Hindu-Buddhist culture is hard for them to fathom. Zakaria Ahmed, a 20-year-old who lives in a sleepy neighborhood of Kathmandu with his wife and 8-month-old daughter, says he spends most nights at home watching TV because he has nowhere to go. "Most of us don't have Nepali friends," says Hassan. "All we do is say hi when we meet them at the café." The group is still treated as something of a novelty in Nepalese society: on May 5, the Kathmandu Postpublished a front-page photo of a group of Somalis acting as bodyguards in a local movie. Dressed in jeans and black tank tops, they were toting toy guns to protect the lead actress of the soon-to-be-released film.

The government's policy of designating Somalis like Olow, Ahmed and Hassan as illegal immigrants places them in a precarious situation. Every day they stay in the country, they accumulate a fee of $6 a day. According to Bhattarai, only a handful of families in Nepal have been accepted through the UNHCR for third-country resettlement and are slated to leave for Western countries. "The resettlement countries should pay for their exit fines," says Bhattarai.

What's next for the rest of the Somalis trapped in this Himalayan waiting room? Diane Goodman, acting representative of the UNHCR in Kathmandu, says despite its nonsignatory status, Nepal still has obligations toward those who cross its borders seeking refuge on humanitarian grounds. A year ago, the nation's Supreme Court ordered the government to formulate new legislation to ensure, in keeping with international laws, the rights for refugees after a lawsuit was filed by a local NGO on behalf of a Pakistani urban refugee. But the government has yet to act on the ruling, citing a lack of resources to manage the refugees and arguing that such legislation could provide impetus for more refugees to go to Nepal. Goodman and others watching the situation are aware of the Somalis' desire to return home. But, she says, "the situation in Somalia has regrettably deteriorated significantly in 2009. We will not facilitate repatriation to a country where the lives of a returning refugee and their family will be in danger."

In the apartment Hassan shares with an Iraqi refugee and a fellow Somali, he shows pictures of his wife, son and daughter in Mogadishu. A calendar hangs on the wall as the sole decoration in an otherwise spartan room with two beds and a lonely CD player. Had he made it to Sweden, Hassan says he would have had his wife and children travel to meet him there. Now, he thinks he made a mistake in leaving. "Given a choice," he says, "I would love to go back home."

This article was first published on TIME. Image courtesy of Rajneesh Bhandari.