Looking Back in Anger 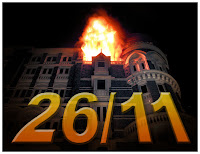 Well, I can't really write anything about 26/11 that hasn't been written about already. Much of what we felt as a nation has been previously captured by the media, various columnists, conscientious citizens et all. Finally, what is left is a feeling of sadness, persistent shock and numbness by the events that unfolded over those three fateful days. But not so much at the loss of life and the general destruction.

No, let me not kid myself. As someone from this violent generation of extremism, fundamentalism and misplaced bigotry, I am more than used to seeing gory pictures of death and violence on sensationalist national television and reading more of the same in the pages of newspapers.

No, this is not what I am really upset about. What gets my goat is the fact that it takes us an attack on three five star hotels, 60 hours of soap operatic carnage and 180 deaths to get us to react the way we did. And that we need an anniversary to remember it again after a year. If instead, this would have been a routine blast (routine blast???), for instance, in a remote part of a tier 2 town, our reaction would most likely have been a shake of our heads, a resigned sigh and a change of channels (with a philosophical comment about how that's all we see on television these days). Because these attacks have, symbolically, been on middle-class urban India, our otherwise blase and narrow urban sensibilities have been jolted out of slumber.
We, therefore, reacted differently and with a purpose. Things hurt when they hit closer to home. India has been hit by more than a thousand attacks since the year 2000, (yes, a thousand) killing scores of people, but such a reaction was not deemed worthy on any of the earlier occasions. What happened then? Were those lives not as important as the ones lost in the 26/11 carnage? Apparently not! As a nation we need to reflect on how insensitive we have become and how a certain insularity has crept in into our urban consciousness. It can therefore almost be inferred that there is no value accorded to human life in this country. Oh sorry, it’s worse than that...the higher up you are in the human 'food chain', the more value your life has. We were happy to shut up and turn a blind eye and shockingly even continue happily with the IPL (in 2008) when blasts killed innocents in Jaipur, but now there’s a hue and cry when an iconic hotel turned into a battle zone. The people who were killed this time were people like you and me. Excuse me, but I'd rather we not care about anybody

at all. At least, this way it’s fair. I feel not for those who died or who were injured in Mumbai during the 26/11 carnage, I feel for their fellow countrymen who have forgotten how to empathize. Or vote. Or care.