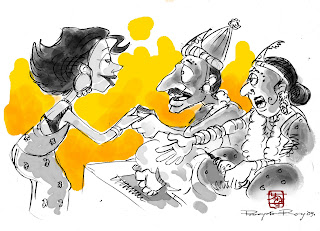 Gobindo Purokayastho was the most eligible bachelor amongst all his Indian friends, colleagues and batchmates from the medical school. Yes, this is about the most eligible Dr Govind Pur – kayast as pronounced by all the doctors, nurses, medical support teams and more commonly referred as Puhr-kayast by patients.

Puhr-kayast was how he pronounced his name when he answered to his pager when he was ‘on call’ for the weekend and that’s how he introduced himself when he made a call to BT ( British Telecom ) to complain regarding their services or an overcharged bill. Stern voice emphasising on his “Dr” as this had always commanded respect from the person on the other side answering in a British accent and both, all too aware of the strong rights of the consumer providing a “no quibble guarantee for any dissatisfaction or better yet…..change of mind”.

Everyone who knew him felt the” urgency” that Gobindo should tie the knot and settle. Innumerable measures were taken to introduce him to some cousin or some friends’ sister to hasten this process of settling for him. Our Gobindo was not sitting idle either. He felt the pressures from home and on his part has taken many major and minor steps to achieve the much desired settling status himself. He has gone to meet innumerable ladies equally aspiring to settle down in life and have the background, mindset as well as aptitude to leave their homeland, parents and families to start a home with an unknown well established, highly qualified FRCS doctor.

Gobindo, as deceptive as the name may sound was actually pretty conversant to the modern way of living and he was probably the best where appreciation of Jazz was concerned, shunned the likes of Kishore Kumar, Jagjit Singh and S D Burman…as “lacks depths” he put it. Whenever there was a party at his friends’ places during the weekends, he was the one to prepare the various rounds of drinks. In fact, he came to Rhia and Prodip’s get-together when Rhia was heavily pregnant with twins, and played the perfect host preparing steakes and various pasta dishes with innumerable sauces along with various salads. All through the weekend, which was a long one, he prepared exotic drinks for the ladies and stronger ones for the men who had driven three to seven hours to join the fun.

Health conscious himself, Gobindo virtually lived on salads so much so in one of the trips to Paris with Rhia and Prodip, along with other friends he even walked into a brassierie on the adjoining street running parallel to the Siene River and ordered a salad with a complicated French name (in which twelve out of fifteen letters were never pronounced)!! As soon as the order was served, Govindo set about to the task of enjoying it after a long hard day of sightseeing. When Priyadarshini asked him sceptically how he found the food, as she herself had acquired a taste bud for spices, he looked up with a look of complete satisfaction for the this chicken salad like it was the Food of the Gods……….with a thick layer of mayonnaise forming a second moustache on his upper lip.

Though all his friends loved him dearly, the women had a small grudge against Gobindo and this had only to do with all ladies who loved to be conscious feminists and loved to debate that the feminine sex is and will always be superior to the masculine. Gobindo on his part was at fault. He had seen too many prospective brides (lost count as well) and every time one asked him why it never proceeded his explanation was always to define a minor defect such as “not interested in Jazz”, “has issues with alcohol and even mocktails”, “does not really converse a lot” or worse still “her looks are very traditional and not sure how she would look in western outfits.” These statements justifiably sent the blood boiling of the women folk while the men listened with a quarter ear………..sensing there were major issues to ponder on.

Time passed and John Major came to power, became unpopular, and Labour made a show with the fiery eloquence of Tony Blair. Everyone sat in the same drawing room with their foot tucked under warm blankets on the thick sofa to mourn the shocking death of Princess Diana with her boy friend Dodi Al Fayed cursing Prince Charles for not being able to protect such a delicate beauty…….a debate that has never found a solution…ever. Labour came to power and the problems of the Health System and ‘Dole Money’ changed little colour. So did the status of the bachelor Gobindo! On one such visit to Calcutta (still known by the name then), Gobindo actually liked someone and the chemistry really worked this time. All the previous grievances were immediately forgiven. He came back with a photo of Priyanka. Very smart-looking, sharp-featured, short-haired lady with a look of intelligence and hence, everyone praised Gobindo. She was educated in Loreto House and had earned a B.Com Honours from St. Xavier’s. Everyone was truly pleased and full of praises.

It was agreed that most of the women would fly in the end of October to spend their three months escape from British winter and the men would follow or accompany Gobindo in January when the marriage was scheduled. Prodip and Gobindo took the British Airways Business Class as they were going to be received in Dumdum by the prospective in-laws and sister in laws. All sounded good. But Gobindo being tensed after being freely a bachelor residing alone overseas for a little less than a decade, went a little too lenient on the free flow of good wine provided by the Airlines. Prodip though in a similar state was still better and they somehow managed to make the desired impression on landing.

The wedding went smoothly. There was a lot of reverence to this “Bilet Pherot Daktar Bor”(foreign returned doctor groom) and all the sister in laws were very eager to please him to the extent that they found “the Bor is sooo cute” . Gobindo was anything, sombre, decent, not good looking and gentlemanly ………but surely not “cute.”All was auspiciously completed and Gobindo came back to the Manchester Infirmary. Priyanka was to follow a few weeks later after her papers were ready.

Now Gobindo was invited to yet another get-together amongst friends and as expected everyone teased him with the new changes that must have transformed him to something more close to the ones already married for long. Some wished to know how he found his new wife……..and during the question-answer and probing sessions…….Gobindo suddenly and timidly said…” She is, of course, nice…but during the wedding I was introduced to her first cousin who is doing her medical at Manipal University. She is really beautiful………wish I had met her earlier.”