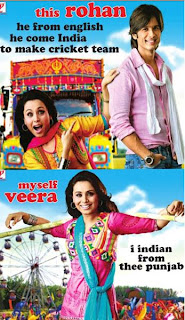 Dil Bole Hadippa- A movie about the intense passion of a young girl from Punjab wanting to play cricket.The young girl named Veera played by Rani Mukherjee wants to make a place for herself as a cricketer and play for her "pind" in an all man's team.Its a story about her earnest try by disguising herself as a young man after she was made to believe that women are better suited to take part in beauty pageants and not in cricket matches. Needless to say Rani Mukherjee's brilliant acting skills and sincere hard work was well potrayed through out the film.The final speech right at the end of the movie was well scripted and is sure to touch the hearts of millions of Indians.

The movie had several flip sides to it which did make the movie look very average in many aspects. As in most Yash Raj films, we are once again taken for a tour of the greeneries of punjab and the swaying  fields that did appear cliched. The romance between Rani mukherjee and Sahid Kapoor failed to create a spark, though each one's individual acting skills in his/her own role was praise worthy. Sahid Kapoor did do justice as a captain of the Indian team.

The side actors like Rakhi Sawant and Sherlyn Chopra does not seem to contribute much to the movie .The comedy also does not seem to trigger much laughter in the audience. The songs and dance sequences seemed out of place and the music very average.

Anupam kher and Dalip Tahil, the  brilliant actors that they are does make a difference to the movie .Their roles were also fitted very well into the film.

Over all, Dil Bole Hadippa is a movie that can be watched may be once on a sunday afternoon...children might enjoy as well.