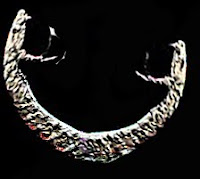 I love her and I can’t lose her ever, to anyone. She’s mine and she belongs to me; wherever she is, in whatever she does, whoever she is with. It was destined to be that way. And I believe in the power of Maktub. You may call it my obsession or write it off as an idiosyncratic disorder of heightened passion and extreme possessiveness of a maverick. Call it whatever you want to, I don’t care. I hate anyone who tries to come between me and her and I swear to God, I can cheat, steal or kill if I must, to protect my love. I am in love with her like I have never loved another person, and I have a right to destroy anything that stops me from reaching her. Yes, I am an iconoclast. I don’t believe in traditions, nor do I subscribe to the norms of fearing the inevitable wrath of the Supernatural. She’s my God, the divine that I completely submit myself to, the omnipotent, omnipresent remote control of my senses, my intellect and my emotions. And nothing and no one is allowed the liberty to trespass into my territory. Yes, am crazy about her, am insane, you might say. But I can’t refute that woman’s all pervasive power on me, I can’t deny my yielding to that magical charm called love,  and I can’t deny us the togetherness that we deserve, come what may.

You may begin to think, why is this eccentric lover illogically rambling about his lady love when he can go and simply utter the vows and take her home? What’s stopping him? One man. I met my lady when she was already married to another man. He is a nice guy, everyone tells me. And he loves her dearly, she confirms. What do I care? I still hate him. I hate him for having time to his advantage and making good use of it. He married my girl. So what if she hadn’t met me or fallen in love with me then? She should have always known that she was the chosen one for me. I sometimes get angry thinking about her impatience, her rush to marry a well settled Mr Nice Guy. I can’t forgive her for not waiting for me. But then, I can never hate her for any of her sins. She was innocently ignorant of my presence whilst he stole her away from me. I hate him for dragging her into this temporary marital arrangement that I do not believe in. One day, am going to get her back to where she belongs... in my arms! And mind you all, protectors of the sacred institution of marriage, it’s not a duel. I am just too smart to let fate play the Russian roulette again. Failure in this matter is not an option anymore. It’s a war, and I will win.  Yes, I will do that, and no matter what price I need to pay, I will get my girl back.

I dial a number. The phone’s ringing. Mr Nice Guy picks up the phone and exchanges pleasantries with me. He’s a smart bastard; suave, diplomatic and shrewd to the core. He treats me like he would treat any of his wife’s close friends. I am extremely tempted to tell him that I am more intimate with his wife than he ever can be and see how he reacts! Would he continue to spill such polite social greetings on me if he found out that even his beautiful wife believed in her heart that she belonged to me? Wouldn’t he want to slit my throat? Anyway, why do I care? I want her. Period.

I don’t really want to talk to him but I have to, so I listen while he speaks. She is not at home; pampering herself on a shopping spree with some of her girlfriends, he informs me.  “You know the girlie stuff,” he laughs. I almost blurt out and tell him I even know the shade of the last lipstick she picked up half an hour back, but restrict myself. He invites me over for tennis and some chilled beer. I tell him it might be a good idea to follow up with a drive over the hill after a few games. He agrees and I hang up with the most sinister smile on my face. No, I don’t feel like Count Dracula. I am not a crook or a scheming politician. I don’t play games, am also not dishonest. I’m only fighting for my right. There’s a Lucifer in all of us, part angel, part devil. Today I am the devil’s advocate. It’s a war, you see, and a fair game is only an offshoot of peace.

I drive up to her place in my sports attire, looking as good as I could with a synthetic smile on my mask. Mr Nice Guy greets me in a pair of white shorts and a tennis shirt. He swings his racquet in the air and I’ve half a mind to hit him hard with it to blow his skull, but I tell myself I have better plans. He calls me “mate” and I join in the pseudo camaraderie as if he were my best friend.

I splash water on my face, wondering what I am doing here playing and drinking with my biggest enemy. I hate him and I am not going to feel sorry for him. His sin is unforgivable. I walk back to the terrace where Mr Nice Guy has already laid out a fine arrangement of drinks and quick munchies for me. I pick up a can. He hands me over a stylish crystal mug frothing with chilled beer. We raise a toast and I think I see a wicked smile on his face. I am not sure. I don’t see his layers nor understand his astute expressions. And I try to imagine how difficult it must be for my simple and beautifully innocent girl to live with a man so different from her. My anger builds up gradually. I gulp in the beer as quickly as I can and ask him out for a drive to catch the evening sunset over the hill. He agrees and suggests picking up his new DSLR to capture the last rays of the sun setting into the sea. I know he wants to flaunt it to me, just as he shamelessly exhibits my girl by his side to the rest of the world.

I am enjoying the drive as we go uphill. I take him to the far end of a cliff, hinting that would be the best view for a perfect shot. The ride is bumpy, almost like a drive into nowhere but I am liking it. He tells me I am wild. I correct him and say, “Adventurous is a better word.” He laughs a hollow laughter and secures his feet on the ground facing the sunset. My mind deviates to the gorge below...the thousands of feet of nothingness, the perfect zero error site of my cold blooded plan. His eyes are on the lens and he’s oblivious to my huge frame behind him. I gather all my strength, and give him a push......

It’s easier than I thought. I see him go down...down....down....hitting the rocks, over the trees, till his limp body flies into the deep. I turn around and head to my car. No, I don’t feel sorry for him. Why should I? I had nothing against him but he called for it. He married my girl. I start my car’s engine and my eyes start blurring....a strange numbness begins to overpower the sensations of my body. It is as if I am losing control...fading out into a sense of uncontrollable void, plunging into a fearful darkness I am unfamiliar with. I know something is terribly wrong, but what I don’t know as yet is that the poison in the beer has just begun to show its effects....