By Tuhin A Sinha
Mumbai, India 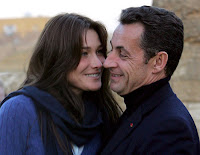 When reports surfaced last fortnight of both Carla Bruni and Nicolas Sarkozy having affairs – she with singer Benjamin Biolay; he with his stylish ecology minister, Chantal Jouanno, few found it amusing. After all, if one couldn’t decipher reasons that brought the two together (other than perhaps a shared aversion for monogamy), there needn’t have been reasons to make them drift apart. However, the conscious indiscretion that the Sarkozy- Bruni romance epitomizes makes it the most Bohemian one ever that involved a politician of his stature.

Consider these: Barely 10 months ago the couple flirted brazenly during a video interview, making it the first time that a French president and his first lady were filmed sharing such private moments in the Elysee Palace . In the interview, the 41-year-old Mrs Bruni-Sarkozy continually stroked her 54-year-old husband's hand and even patted his bottom.
The diminutive president, in turn, tried to look as much a President as he could, as he perched on the edge of an armchair, his feet swinging above the ground.

After the intimate indulgence, the wife whispered "Bon courage, chou chou", which means "Be brave, my little darling".
In August last year, the couple took off on a 3-week vacation at French first lady's family mansion in Cap Negre, on the Mediterranean coast. Here, the couple seemed just as wildly in love, indulging in a passionate lip-lock in the sea. Besides, of course Mrs. Bruni was her generous best, allowing myriad shots of her in multiple poses in her skimpy black bikini.
In November last year, there were reports of the couple planning a child together. All seemed hunky dory till the most recent reports that suggest that the couple is headed towards a split.
Now if you consider certain other aspects, you might understand, why despite its extravagant assortment of sex, power and glamour, the Sarkozy-Bruni saga deserves to be taken with a pinch of salt.
Sarkozy and Bruni first met at a dinner on November 14, 2007 thrown by Jacques Séguéla, the PR adviser to the president. It instantly sparked a courtship that was unusually fast and furious. One believes that Sarkozy’s trait of not taking ‘no’ for an answer was perhaps instrumental in expediting the romance. In that sense, for Sarkozy who was only recently divorced then, possessing the prized, super gorgeous Bruni was a conquest.
For Bruni whose ex-lovers included the who’s who of Europe( including former French Prime Minister Laurent Fabius), Sarkozy only provided the prospect of retaining power. After all, who wouldn’t be flattered when the President of your country gets obsessed with you?
The alacrity though, with which the couple got married, after less than three months of a breezy courtship should put all our matrimonial sites to shame. The psychological factors that could have prompted this sudden marriage between two mature and much explored individuals are stuff that Milan Kundera might be able to explain better.
That Carla Bruni is a rebel is no secret. Barely weeks after her marriage, Bruni is reported to have said she is easily "bored with monogamy" and that "love lasts a long time, but burning desire — two to three weeks.”
Sarkozy perhaps feels much the same. However, the limitations that the present power equation between the couple impose on him, restrains him from being that candid.
And that only leads us to another possibility which really doesn’t seem implausible here: Did Sarkozy circulate his own indiscretions in an attempt not to appear the underprivileged/deprived partner?
About the other more obvious likelihood is that the couple has come to terms with each other’s infidelities so long as it doesn’t upset the more important factors that need them to be seen together.
For Sarkozy, who is 12 years older than Bruni and 4 inches shorter than her, it’s a crucial phase. In the power equation of this romance, he needs Bruni more that she needs him right now. After all, the image a more robust married life will help him at the hustings slated for 2012.
Till then Nicholas Sarkozy might as well put up with some of Bruni’s short-lived burning desires, as she might want to describe them and quietly hum the melancholic “dil to bachcha hai ji…”

This article was first published in The Times of India.
Posted by Annie's Desk at 11:13 PM