I love him and he does not like sambhar 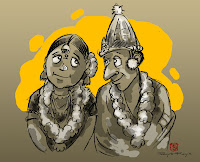