By Ananya Mukherjee
My Little Magazine 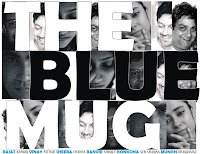 Experimental theatre often needs to be taken with a pinch of salt. Overemphasised bouts of exaggerated and unpredictable overtones sometimes leave the audience clueless about the intellectual relevance of the acts.
However, if the unfamiliar structure of an unscripted drama leaves you enthralled, here’s something you might want to watch.
The Blue Mug, produced by The Company Theatre, Mumbai and directed by Atul Kumar, is a devised piece of theatre, seventy-five minutes of monologues, personal vignettes intercepted by a few conversations. The one act play with no intermission revolves around the lives and memories of four engaging actors—Rajat Kapoor, Sheeba Chadha, Munish Bharadwaj and Vinay Pathak, as they try to filter the significant and insignificant moments of their pasts, memories rooted in their socio-cultural upbringing in India, from the abyss of forgetting.
Though individualistic, collectively their memories form a collage of Indian identity that viewers can quickly identify with. But perhaps the most engaging part of the play is the sub storyline, inspired by neurologist  Oliver Sack’s book ‘The Man Who Mistook His Wife for a Hat”, a sympathetic account of a case of bizarre memory loss, carefully woven into the main framework and presented outstandingly by actors Ranvir Shorey and Shipra Singh.
Ranvir Shorey as the simpleton who lives in the realities of 1983, and has mysteriously lost his ability to form new memories takes most of the audience’s applause.
Yes, there are fallacies in this near-to-perfect production in Hinglish. But most if that has little or nothing to do with the actors. The scenes get a bit technically repetitive and the stage is not quite utilised to its full. The English subtitles to desi jokes/dialogues are eye-jerking for the audience. In the interchange of thoughts between Shipra Singh and Ranvir Shorey (the doctor and her patient), the actors are distantly placed at two ends of the downstage, compelling viewers to make a choice of focus between either.
Having said that, overall, the comic timing blended with the atypical Indian canvas of pathos and drama makes The Blue Mug an enjoyable and thought-provoking watch.
Posted by Annie's Desk at 10:50 PM