By Bidisha Bagchi
St Joseph, Michigan, USA
My date with Sin City started the moment our flight landed at the Las Vegas international airport. Okay, okay, like President Obama, I apologise for using a cliche to describe the Mecca of gambling, but can one help using it if the first sight in after landing is one of slot machines —rows upon rows of them, brightly coloured? 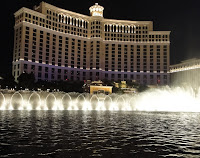 As we walked towards the taxi stand I looked up at the giant video screens that advertised the different shows in the city and kept counting the ones that I wanted to see. I realized I wouldn’t even be staying in Vegas long enough to run the gamut of activities avialable in this city in the middle of the desert in Nevada…

“Would you be gambling mamma?” asked my teenage daughter. “I’ll play blackjack and roulette,” I answered and could sense her fuming at the idea of participating in a sin and wasting her dad’s hard earned money. But who cares, by then I was already the ‘Vegas Baby’ as my friends back home in St Jo dubbed me.
Las Vegas does not have any genuine ‘sightseeing’ attractions, if you know what I mean. No castles, forts, lakes or mountains etc, but the amount of time one can spend in this city is far more than any other place. In fact, don’t even be misled by the thought that Vegas is a city where one can only gamble. Certainly not. There are loads of things to do, see, eat and drink and even shop...
We began by strolling down the famous Strip. It was cold and sunny, ideal for long walks on roads teeming with people. Interestingly, lots of them had Asian features. The 6 km long Strip is flanked by casinos and hotels that are beautifully done up. It’s like going on a world tour by cruising down a road.
Each hotel’s exterior décor has a theme: for example, one is done up like the Sphinx in Egypt; the statue of Liberty adorns the New York hotel with a roller coaster encircling it. The Venetian, of course comes complete with canals and gondolas while Caesar’s Palace has statues of the Roman emperor, Venus and even a replica of the Trevi fountain!
Our first taste of gambling was in Kathmandu almost 12 years ago. We lost Rs 500 in seconds and I promised never to enter a casino again. Clearly I didn’t mean it as I merrily marched inside MGM in Las Vegas.
I chose MGM Grand because we had booked tickets for the Cirque du Soleil aerial acrobatics show and arrived little early to see the ‘not so glamorous from outside’ hotel. I chose a roulette table and my daughter was immediately asked to go elsewhere as children are not allowed there. Being called a child at 14 made her even angrier!

I placed my bet and once again in the blink of an eye my $20 vanished. That did it. No more, I vowed, and proceeded towards the theatre where KA was to be staged. The mind-boggling show kept us spellbound for 90 minutes, with awesome performances, war scenes and sea storm scenes all done beautifully on stage.
As the sun set, Las Vegas turned to a fantasy land with lights, lights and more lights. Huge neon signs flashed, some animated, some digital, all so gorgeous. Each and every hotel was decked up, ready to welcome anyone set for partying hard through the night. We just walked. For hours… Traffic on the Strip, incidentally, is messy, moving bumper to bumper, and taking ages to reach somewhere.
We finally stepped inside the Bellagio, considered one of the best hotels on the Strip, but I hated the décor. Flashy, with huge floral beds and gaudy colours. The hotel’s famed musical fountain, however, was absolutely magnificent. Playing every 15 minutes, in the evening only, I made it a point to watch it at least once, every day.

Going around Caesar’s Palace was like a tour of Rome. Especially the forum shop arcade that had an artificial sky painted so well that it could easily be mistaken for a natural evening sky. Adorned with statues of ancient Romans, amphitheatres and even a huge model of a Trojan horse (why, I cannot fathom), it was a fascinating stroll to the venue of the ‘Atlantis’ show, held every half an hour.
There are no tickets and no seats; people who wanted to watch sat on the marble floor. We did too. The story of king Atlantis and his children unfolded for the next 30 minutes: greed and power, all dramatically depicted through light and sound.
The next day was reserved for another mind-blowing show of The Phantom of the Opera at the Venetian. My daughter and myself being ardent fans of the ‘angel of music’ waited eagerly for our show so that we could rush in. Meanwhile we wandered around the Venetian, whose ceilings were like the Sistine Chapel.
The gondola rides on its canal were expensive — $16 per person. Why not save it for a gondola ride in the real city of canals? So we merely stood there and watched. Then, of course, the Phantom swept us off our feet with 90 minutes of special stage effects and haunting melodies.
Among our other Vegas experiences was an erupting volcano — at the Mirage hotel — that spit artificial lava and smoke very realistically! The replica of the Arc de Triomphe, the glittering Eiffel Tower and giant screens advertising shows and attractions made us lose count of days and time. We even made a trip downtown to Fremont Street to see the famous ‘Stratosphere’ tower but somehow our minds stayed on the Strip. 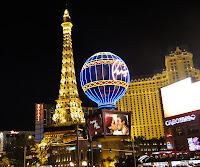 For shopping enthusiasts, a memento can mean just a keychain, a cup or maybe some coasters but look around and you’ll find more appropriate souvenirs, say, beautiful dice with red or black dots that can serve as paperweight! As for food, sushi bars are tempting. For authentic Chinese food, Noodle Asia at the Venetian is the best, but when desi khana pangs begin, the Tamba or Gandhi are perfect to tingle those taste buds.
It is said ‘What happens in Vegas, stays in Vegas.’ Well, I don’t agree because the joy derived from the ‘fun’ we had in Vegas is still with us in the form of happy memories.

The article was first published in ET Travel, The Ecomonic Times, New Delhi
Posted by Annie's Desk at 7:47 PM